“The legend has become hazy, a half-remembered war story known only to a few veterans of Vietnam … Yeah, I remember. The Ravens – a weird bunch of guys who lived and fought out there in the jungle in the Other Theater somewhere. Hell, what was the name of the country?”  ~  Christopher Robbins, (Prologue) The Ravens – The Men Who Flew in America’s Secret War in Laos

This month marks the 45-year anniversary of the Kent State shootings, an event not likely to fade from my memory for a long time to come. At the time, I was completing my credential program at the University of Oregon.  President Nixon’s April 30, 1970, announcement on national television that the United States was invading Cambodia and would need to draft 150,000 more soldiers set off massive protests on campuses throughout the country. In Ohio, the governor dispatched 900 National Guardsmen to the Kent State campus. It seemed unthinkable that soldiers would fire at unarmed students. The outcry across the nation was instantaneous and exponential, 67 Shots that pierced the nation. 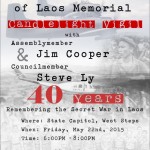 As I have mentioned in a previous post, this month also marks the 40-year anniversary of the “Secret War in Laos.” Friday evening I headed to the steps of California’s State Capitol to take part in a candlelight vigil to commemorate the Hmong and Mien soldiers who lost their lives fighting to support our nation’s Vietnam War efforts.

When I joined the anti-war movement, my concern was to bring home American soldiers, many of whom were college or even childhood friends. In 1970, I knew nothing about the CIA’s covert operations in Laos and the many ways the Hmong and Mien supported the U.S. soldiers. 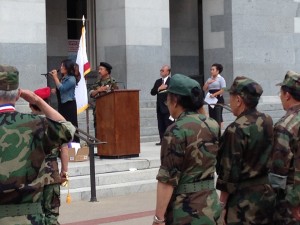 Salute to flag during singing of National Anthem

The candlelight vigil opened with a young woman taking the microphone and beautifully leading us in our National Anthem. As I watched two rows of soldiers saluting our flag, I wished I knew then, 45 years ago, the high price these soldiers and their families would  pay for their alliances with our troops.

I am very grateful to Elk Grove City Councilmember Steve Ly (Elk Grove’s first Hmong councilman) for organizing this event – and for providing me with the opportunity on this Memorial Day weekend to commemorate those who lost their lives during the Vietnam War years and to thank those who served our county and came back home and to those who served and came to a new home.

“The least goddam thing somebody could do is come back and say, ‘I’m sorry.”  ~ “Pop” Buell, The Unconstitutionality of the Secret War in Laos