A few NECC conferences ago, I attended a session with Chris Lehmann. He introduced the word “prosumer,”  a combination of consumer and producer.  Chris predicted this word would soon make its way into the English language.

I am fortunate to work with a number of teachers who actively, consciously structure a students-as-producers model of learning. Each time I listen to Marco Torres talk about students as receivers of information vs. creators of information,  I realize the importance of showcasing the work of these innovative teachers, so that their colleagues and administrators will begin to consider the price students who are locked into year-long test-prep programs will pay for being denied access to our increasingly participatory culture.

One resource I’ve used for the past few years to start conversations around new definitions for 21st century literacies is B.J. Nesbitt’s A Vision of K-12 Students Today (an adaptation of Michael Wesch’s A Vision of Today’s  (College) Student) – a plea from students to become creators and producers:

I now have a new resource to add to my students-as-producers toolkit: the 2010 Horizon Report. This annual report 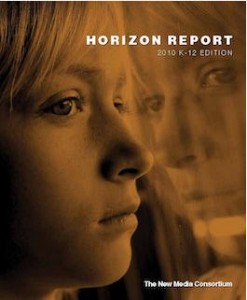 from the New Media Consortium’s Horizon Project “describes emerging technologies likely to have a large impact on teaching, learning, or creative inquiry on college and university campuses within the next five years.”

If you don’t feel like reading it in its entirety, it’s very easy to skim through, thanks to the navigation-friendly format.  You might want to start with Key Trends and then move on to Critical Challenges.

Want to see what’s on the horizon? Check out these sections of the report:

If you wish you had a presentation that you could tomorrow with your colleagues, the CoSN group has created a teacher kit, complete with PowerPoint, waiting for you to download from their site.

I truly believe that one small step towards meeting the critical challenges listed in the report could be a commitment at all sites to shift at least some of the school day into a create/produce mode.

I would love to join – or co-facilitate – a conversation on making the shift from consumer to producer! If you have resources on the topic, please add a comment!

Skype is great tool…but movie making with Skype? Meet Mr. Alfonso, one of my EETT teachers, who I’m guessing can take any technology tool to a new level. His Meet the David Reese Bunch video is but one of a growing bank of samples of how movie making can promote shared learning communities.

A visit to Rudy Alfonso’s classroom blog will provide you with a window into what the act/art of digital composing looks like in his 5th grade classroom.  Forget any stereotypes of Title I teaching (sometimes limited to multiple-choice, lower-level thinking activities); they don’t apply to this classroom.  Based on a recent visit to Mr. Alfonso’s classroom, one of my resolutions for the New Year is to document his students’ year-long learning journeys, including video interviews. I’m pretty sure the end product will be an invaluable resource for other educators who want to provide a 21st century curriculum to their elementary students, but just need some tips and models.

Wouldn’t you love to hear first-hand why Serena, for instance, who has completed her storyboard for her second movie and is now ready to move into production, has decided her first scene will open with the particular ‘Establishing shot” shown in her storyboard?!

At the very minimum, I’m planning to add a monthly update on my digital travels with Mr. Alfonso and his class.  I hope you’ll join me – and contribute to the conversation with links to what new technologies look like when they get legs and walk beyond workshops and into your classrooms.

Ernest Morrell is opening the session with 4 discussion questions:

Dynamic, challenging time for teaching English and literacy – and meeting increased literacy demands. Teaching 21st century literacies can help us to address many of these challenges while providing opportunities for youth to produce socially and academically powerful texts in ways that were not previously possible – democratizing access to literacy.

Elementary Students: Teatro- Theater of the Oppressed (Pablo Freire)- Education for humanity’s sake. Elementary students out of Watts neighborhood of L.A. doing tableau on violence in their neighborhoods. Actors (students) then invite audience in to dialogue. Students were producing both academic text and socially relevant text.

11th Grader English Students – Great Gatsby unit on critical media literacy & the American Dream. Students analyzing images in 50 Cent and Seventeen and learning to read images. Between the gangster image and glamour image, teens die due to inability to read the media. Critical media literacy is a citizenship skill! The American Dream tied to wealth, not citizenship. Assignment = counter media campaign (e.g., female athletes, tough guy tutoring younger students) If you don’t like the media, make a new media – that’s the difference with 21st century literacy. Students must learn to de-construct images – and to create their own.

“There is absolutely no inevitability as long as there is a willingness to contemplate what is happening.” Marshall McLuhan

“The question is not whether English will change, but how it will change.” Ernest Morrell

I’ll send out a Tweet as soon as I’ve uploaded the podcast for the session.