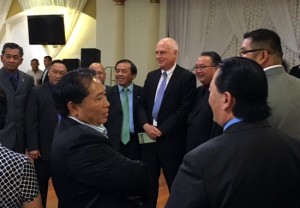 Oct 31 dinner with Daniel Clune, US Ambassador to Lao PDR

Last weekend I had the privilege of joining Daniel Clune, U.S. Ambassador to Laos, for a Saturday night dinner with 300+ guests (mostly Hmong, Mien, Khmu, and Lao refugees from the Secret War), followed by a less formal, more intimate Sunday brunch. The dinner ignited a conversation and invitation for Sacramento’s Laotian community to give back to Laos by contributing to its much needed economic development. 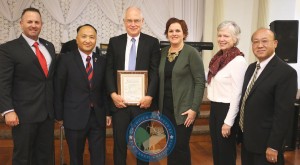 Many of the people who attended the Sunday brunch had also attended the Saturday evening event. I think having a second get-together so close to the first encouraged guests to ask more personal questions. A common thread during Q & A  was the emotional pain shared by the in-between generation, who were only children when they and their parents escaped from Laos to Thailand and then made the life-changing journey to the U.S. Many who stood up to ask Ambassador Clune a question choked back tears or had trouble putting into words the sacrifices their parents had made and the enormous obstacles they faced to make a better future for their children. They referenced the courage of their fathers, uncles, and grandfathers, who put their lives on the line when they supported and fought along side U.S. troops during the Vietnam War. Because these veterans were classified as refugees, not soldiers fighting on behalf of the U.S., they have not been eligible for VA (Veterans Affairs) Benefits, including medical assistance.

As we head into the November 11 national celebration of Veterans Day, I recommend watching Vietnam War photographer Galen Beery’s powerful 12-minute documentary on how it is possible to be a refugee and a soldier:

I am deeply grateful to Elk Grove City Councilman Steve Ly for sending me the link to Galen Beery’s film, for including me in many special events within the Sacramento community and across the state, and especially for inspiring and supporting the Secret War in Laos Oral Histories Project. It feels as though the journey into researching and documenting this missing chapter in our history books is just beginning.