I’ve never been to Rwanda.  Ever since the 100-day genocide – and after watching Hotel Rwanda – I’ve followed news stories, always hoping to better understand how survivors find the resilience to return to “life as normal.”

At last, I am traveling from California to Rwanda….virtually. Thanks to the vision and determination of my amazing National Writing Project colleague and HEN partner Pam Bodnar, I will be able to join her students as they blog about the sights visited and personal insights experienced. I’ve added the Rwanda Trip 2012 blog to my RSS reader and am really looking forward to joining in the conversations and learning from both Pam’s students and Sacramento USD friend Jeremy Pretko’s students, who are also part of the AfriPeace organization.

But how do you prepare high school students to listen to and experience the first-hand accounts of 100 days of death and destruction as neighbor turned against neighbor in an effort to eliminate an entire group of people?  I think back to my college days when on a trip to Munich, Germany, I ventured to the Dachau concentration camp, with little more preparation on the topic of genocide than having read the Diary of Anne Frank as a 7th grader and maybe a page or two about the Holocaust in a college textbook. I was emotionally and physically ill for hours following the tour.

Pam’s students are prepared. Although now in high school, as 8th graders, they studied the Holocaust not only in their U.S. History class, but also as part of Pam’s Peer Mediators Team.  They delved into the events that led up to the exclusion, forced removal, and murder of over 6 million Jews and other “undesirables” during World War II. But they did not study the Holocaust as an isolated event on a timeline that happened “then and there.” Instead they researched connections from “then and there” to “here and now.” Events including the genocides in Rwanda and Bosnia, as well as the internment of Japanese-Americans during WWII. They approached events of the past and recent past as a call to social action.  They became “change writers.”

I hope you will join me in following the Rwanda Trip 2012 students in what I already know will be a highlight of the summer and a testimony to the power of youth to make a difference. 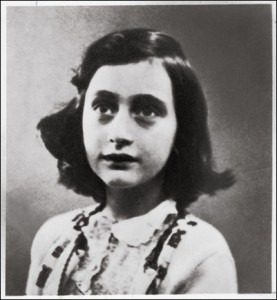 I was introduced to the Holocaust in 7th grade. Like many middle school students, I was given a window into the horrors of the Nazi “round ups”  through reading the Diary of Anne Frank.

My long-time interest in Anne’s story was rekindled last weekend when I had the honor of meeting with Hannie Voyles, a schoolmate of Anne Frank’s. Hannie’s story of survival under five years of Nazi occupation of the Netherlands is every bit as compelling as Anne’s story. It is my hope that Hannie will soon share her story beyond her community (Chico, California). I just finished watching footage from a recent interview she did with a group of 8th grader peer mediators  from Chico’s Marsh Jr. High.  While Anne Frank was hidden away, Hannie and her sister were out on the streets everyday in the eye of the storm.*

Teaching the Holocaust requires having age-appropriate resources.  I was initially taken aback when I discovered that the Open Court Reading Program includes a piece about Anne Frank in the 4th grade anthology. However, in working with several 4th grade classes (in my role as coordinator of my district’s EETT grant), I have come to see that elementary students are quite capable of delving into complex social issues that span communities and generations. If the materials and the manner in which the topic is introduced are age-appropriate, 4th graders are ready for and capable of joining in meaningful shared conversations on tough topics.

Through my participation in the National Writing Project’s Holocaust Educator’s Network, I’ve accumulated a variety of resources for teaching about genocide in general and the Holocaust in particular.  After meeting with Hannie Voyles, I am now seeking resources that best tell the impact of Nazi occupation on school-age children and their families and that provide insights into the topic of resiliency of the human spirit. Anne Frank’s story will be my starting point.

Here’s what I have so far:

If you have Anne Frank resources to add to the list, I hope you will post a comment.  My goal is, over the summer, to develop a unit on name calling that could be used across grade levels and would help students make connections and comparisons between what was “then and there” (the Holocaust) to what is “here and now.”