Thanks to George Lucas’s release of Red Tails, the story of WWII’s Tuskegee Airmen, students and teachers have a wonderful new resource for celebrating African-American History Month.

I know a Tuskegee Airman. His name is Alexander Jefferson. I met him 4 years ago at the Denver Airport. He was on the same flight from Sacramento to Denver. I spotted him at the baggage pickup zone.

It probably seemed like an idiotic question, but seeing an African-American gentleman wearing a Tuskegee Airman jacket, I had to ask, “Pardon me, but were you a Tuskegee Airman?”  He was actually on his way to present to students in one of Denver’s public schools (saw his picture a day later in the Denver Times as he stood surrounded by young students). Our 10-minute conversation was absolutely the most worthwhile time I have ever spent waiting for my luggage.

Alex was one of 32 Tuskegee Airman to be shot down over Germany, and the only one to have written about the African-American experience behind barbed wired in a German prison camp: Red Tail Captured, Red Tail Free. From NPR’s recent interview, you can get an idea of his energy, his resiliency, and his commitment to fighting for social justice.

One month after meeting Alex, thanks to the coordinating efforts of  Janine Lim and our Sacramento Educational Cable Consortium (SECC), we were able to record Alexander Jefferson as he connected from Michigan with students at two Elk Grove school sites (Ed Harris Middle School and Monterey Trail High School) – bringing a “living voice” into their U.S. History class discussions: 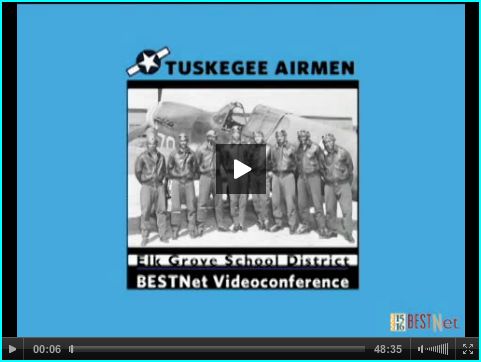 With the opening of “Red Tails,” I thought teachers might be looking for a range of primary sources to frontload the historical context of the film – and to ignite a passion for learning more about the Tuskegee Airmen and our nation’s pre-Civil Rights era. Here is a starting list:

I’ll be adding to the list throughout the month, so if you have any resources to share or activities you’ll be doing to commemorate the challenges and accomplishments of the Tuskegee Airmen, please jump in and leave a comment:-)

I have a message on my cell phone  I will never delete.  It’s the voice of Tuskegee Airman George Porter letting me know that he’d be very happy to meet with students in Martin Billings’ 11th grade US History class and share his experiences as a Tuskegee Airman.

Formed in 1942 amid controversy, the Tuskegee Airmen  showed the nation its black citizens were equal in skill and patriotism to their white counterparts. Although George Porter was never a pilot (due to a health issues with high altitudes), he joined the Tuskegee team as a mechanic.

I met George a year ago, when he came to Mr. Billing’s class to join the keynote presenter Alexander Jefferson for a 3-way interactive videoconference. A Google search will bring up a long list of links for both these former Tuskegee Airmen. For an introduction to George, I particularly like the four-minute 2007 New Orleans Times-Picayune interview posted below.

Before, during, and after World World II, George Porter’s story is one of remarkable resiliency and a determination “to be the best you can be…to be even better than your best.” During the 40-minute visit to Mr. Billing’s class (below), George explains racism, segregation, and living through Jim Crow times, which he refused to be defeated by.

This March 2010 presentation and response to students’ questions will provide you with an understanding of George Porter’s commitment to making sure the public, especially young people, understand how eager and willing he and other African Americans were to fight for America, despite a nation’s long running record of treating them as second-class citizens.

I hope you will share George Porter’s story with your colleagues and students. He does not want this chapter of our nation’s history to be forgotten.