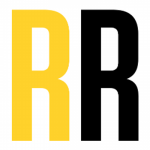 A huge benefit of the Internet is having 24/7 access to a growing treasure trove of national archives (i.e., Library of Congress, Smithsonian, National Archives and Records Administration) housing primary sources (documents, newspapers, interviews, videos, etc.) that provide a window into the past. As a 1999 Library of Congress Fellow, I’ve been watching collections grow for 20+ years. I love directing students to the Google Newspaper Archives, for instance, where they can read about historical events in the moment, as they were actually unfolding.

Recently, I began following RetroReport.org, whose mission is to:

“to arm the public with a more complete picture of today’s most important stories. We correct the record, expose myths and provide historical context to the fast-paced news of our world today using investigative journalism and narrative storytelling.”

This valuable and rapidly expanding resource helps teachers and students make connections between then and there to here and now.

On Tuesday, I had the opportunity to join a thought-provoking RetroReport presentation. This fast-moving Zoom session, sponsored by TOLI (The Olga Lengyel Institute for Holocaust Students and Human Rights), focused on the documentary Conspiracy Theories and Fake News from JFK to Pizzagate:

I grew up in California’s Bay Area, where I attended St. Joseph’s High School in Berkeley. As a sophomore, I can remember the infectious excitement of my teachers and principal as they informed us that President John F. Kennedy would be visiting California and that we would have the opportunity to line up on University Avenue to watch his motorcade on its way to the UC Berkeley campus. 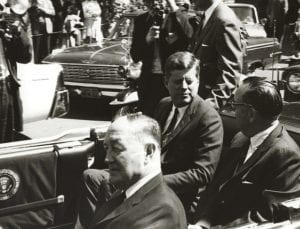 As a redhead, I was struck by the slightly auburn highlights in the President’s hair as his motorcade passed by on a beautiful, sunny Berkeley day. This historic event was the first time I stood with classmates, teachers, and hundreds and hundreds of others to cheer on – and stand in awe of – a President of the United States. An unforgettable moment for a 15-year old.

Nor will I ever forget where I was sitting on November 22, 1963 (3rd row back in my typing class), when our principal came over the PA system to announce that President Kennedy had been shot. She did not tell us at the time that the President had been killed. A pulpable sadness and silence enveloped our tiny one-building campus. Like so many parents who came to pick up their children, it was my mother who told me our President was dead.

I have not been able to find a copyright-free image photo of John John saluting as his father’s casket passed in front of him. As a family, we did not discuss politics, so I’m not even sure if my parents voted Democratic or Republican. Almost 60 years later, I still remember watching the funeral on TV and – for the first time in my life – seeing my father pull out a handkerchief to contain his sobs in response to John John’s iconic salute. 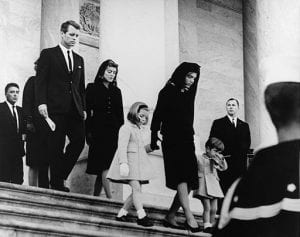 After spending my junior year in college abroad (Pavia, Italy), my final stop on my journey back to the States was Ireland. Never had I seen so many photos of JFK on display. From shops to pubs – and even on the bathroom door of the B&B where I was staying (yes, that seemed a bit much, when seated on the toilet, to be eye-to-eye with the President), Ireland still mourned the passing of JFK.

I am aware of the steady, ongoing stream of conspiracy theories, which emerged soon after the assassination of JFK via radio, television, newspapers, and magazines. I ignored them then; I ignore them now. Today, of course, with the availability of Facebook, Twitter, and other social media, we have seen that anyone anywhere can instantly and effortlessly accelerate the spread of “fake news” and conspiracy theories.

In July, I retired from a job I loved: teacher/technology integration specialist for a wonderful school district. I have blogged many times of the amazing learning adventures my colleague Kathleen Watt and I have shared over the years. As coordinators of the district’s digital citizenship program, we’ve developed, gathered and curated resources to help teachers bring media literacy into their toolkits. Working with outstanding organizations such as Common Sense Media, PBS/KVIE, and more, our goal had initially been to promote media literacy for students, our target audience.

Then came Pizzagate. When Edgar Welch entered Washington DC’s Comet Pizzeria to rescue children he believed were being hidden and sexually abused, this was a wake-up call. In an age of misinformation/disinformation, we (adults) also need media literacy skills. We started gathering and posting resources and offering districtwide and statewide (CUE, California League of Schools) workshops… 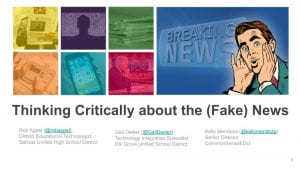 … and creating lessons for detecting misinformation/disinformation, including our Flex Your Fact-Checking Muscles: Read Laterally hyperdoc lesson – and accompanying poster (below). 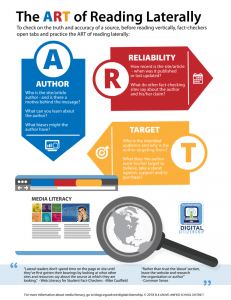 As an educator and a citizen, I pledge to question and speak out against false information – on both sides of the political spectrum. More than ever, I appreciate organizations such as Retro Report that bring history alive and allow us to step into and learn from the past.

Decades later, I still carry the images of JFK, along with Jackie (in her pink suit), Caroline and John John in my heart. Every trip to Dallas, to visit my son, we always include a drive to the Grassy Knoll and a walk past the former Texas School Book Depository, where we stop to gaze up at the sixth-floor window and to honor the legacy of President John F. Kennedy.

Thank you again, Retro Report, for your commitment to make visible how the past connects to the present – and helps shape the future. 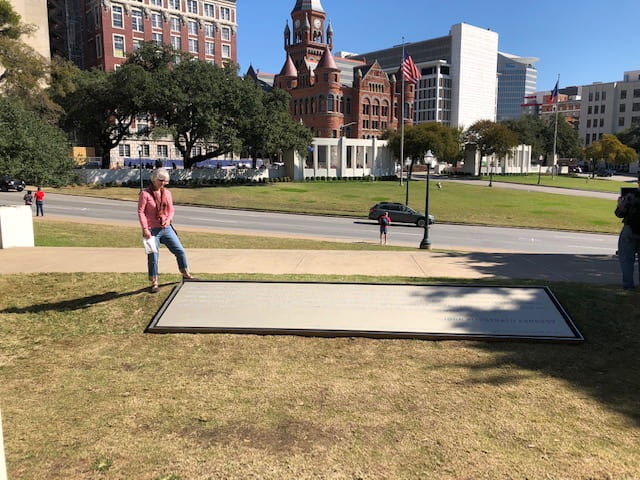