I have blogged about and referenced the Time of Remembrance Oral Histories Project many times in recent and past years. I first shared about the TOR project in 2007 (Time of Remembrance: Move Over Ken Burns!), blogging that I would soon be documenting the stories of Japanese-American citizens in the Florin-Elk Grove region (south of Sacramento, California) who, following the bombing of Pearl Harbor, faced discrimination, exclusion, and forced removal from their communities. Thanks to my district’s partnership with the Sacramento Educational Cable Consortium (SECC), their talented videographer Doug Niva joined me and my colleague Kathleen Watt on the journey, filming and editing professional quality interviews with over 30 former internees.

Five years ago Elk Grove Mayor Steve Ly, a City Councilman at the time, shared a little known story from the Vietnam War with our superintendent. Steve had learned about our TOR World War II project and asked that we consider documenting the Secret War in Laos. As a refugee from the Secret War, he thought it important for the Elk Grove community to know about the  many ways Hmong and Mien (two growing populations in Elk Grove) had supported U.S. troops during our involvement in the Vietnam War.

Steve Ly was the first interviewee in our Vietnam War section of the TOR project.

Thanks to Steve’s recommendations and the continued commitment by the SECC to bring history alive, we now have 16 interviews from our Hmong and Mien community. Their interviews provide invaluable insights to understanding the challenges faced by refugees, such as language barriers, cultural differences, huge shifts in geography, and loss of homeland and heritage.

We also have interviews with American pilots (“Ravens”) who flew secret missions over Laos, which stand as a testimony to the contributions and sacrifices of their brave “backseaters”/”Robins”.

This week we will be transforming our former Student Gallery page to a broader topic: On Coming to America. The On Coming to America page will still feature student-led interviews, but also teacher and community-led interviews, all with the common thread/theme of the challenges, contributions, and resilience of our immigrant and refugee populations.

In 2011, my Chico friend (and TOLI colleague) Pam Bodnar contacted me to share that she had invited Chico resident Hannie Voyles, a Holocaust survivor from the Netherlands, to share her survivor story with a group of students at Marsh Middle School. Minutes after Hannie’s visit, Pam called to recommend that Doug Niva and I come to Chico to interview Hannie. We did.

Note: To quickly access specific parts of Hannie’s interview, here is the link to the time codes and short descriptors. Thank you to Doug Niva and our partnership with the Sacramento Educational Cable Consortium (SECC) for filming the interview.

Nine years later, I connect with Hannie on every opportunity I can find – including four bike & barge trips across the Netherlands (with a 5th trip coming up in August). With each visit and each trip, Hannie provides me with another window into her childhood in Amsterdam, where she attended the same Montessori school as Anne Frank before the Nazis invaded.

Last week I drafted a lesson to accompany Hannie’s interview. As always, I sought feedback from Kathleen. We soon had the lesson ready to share, along with a teacher’s guide. Accordingly, the On Coming to America page (formerly the Student Gallery page) of the TOR website now includes a link to Hannie’s interview, along with time codes and descriptors (so students/teachers can quickly move the YouTube bar to specific parts of the interview).

If you know Holocaust survivors or “second gen children” in the greater Sacramento region who would be willing to share their stories, please leave a comment. I strongly believe in the power of story to change hearts and minds – and the need to document first-hand and second-hand accounts before they are forgotten and lost.

“We must keep this history at the forefront of our collective memory, to prevent other individuals or groups from suffering as we did. We are always vulnerable to societal weaknesses;we are not too wise to repeat ourselves.”     Hannie J. Voyles, Storming the Tulips

As always, we invite students to document On Coming to America stories from their families, school districts, and communities – and share them with us via the TOR website. 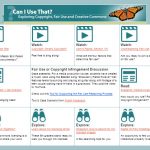 I love the many ways teachers in my district – and probably your district too – are guiding student-centered conversations  about building positive digital footprints, protecting online privacy, and confronting cyberbullying. A shout out to Common Sense Media, iKeepSafe, and Netsmartz for the wealth of free resources and lessons you provide to schools on these key digital citizenship topics.

There is a fourth digital citizenship topic that many teachers are increasingly recognizing the need to address: intellectual property. By 5th grade, most students have been warned about the consequences of plagiarism, a conversation that is typically repeated throughout their middle and high school days. While plagiarism is certainly an important topic, in a digital age, copyright,  fair use, and Creative Commons also need to be included in the conversations.  Given how easy it has become to download, copy, remix, and upload online content, students need to have an understanding of both their intellectual property rights and responsibilities. As a co-director of my district’s Digital Citizenship initiative and co-curator of the Digital ID project, I am always seeking teacher-friendly/student-friendly resources on intellectual property. I also facilitate district-wide and national workshops ( e.g., CUE and ISTE) to help teachers understand that copyright is different from plagiarism and that fair use and Creative Commons are also options for our students.

Based on questions from workshop participants, two years ago I created Can I Use That? A Guide for Teaching about Creative Commons. I always review the guide prior to a workshop to check if I need to update any information or add new resources.  This year, in preparation for the March CUE Conference, I’m adding a #HyperDocs* lesson that invites students to delve into copyright, flex their fair use muscles, and license their own creations via Creative Commons. So here it is: Can I Use That? Exploring Copyright, Fair Use, and Creative Commons.

Hope you can join me and the fabulous Jane Lofton for our CUE Can I Use That? session (Saturday, 8:00)! If you have questions about the lesson or suggestions for updates to the Guide, please respond with a comment or contact me @GailDesler. 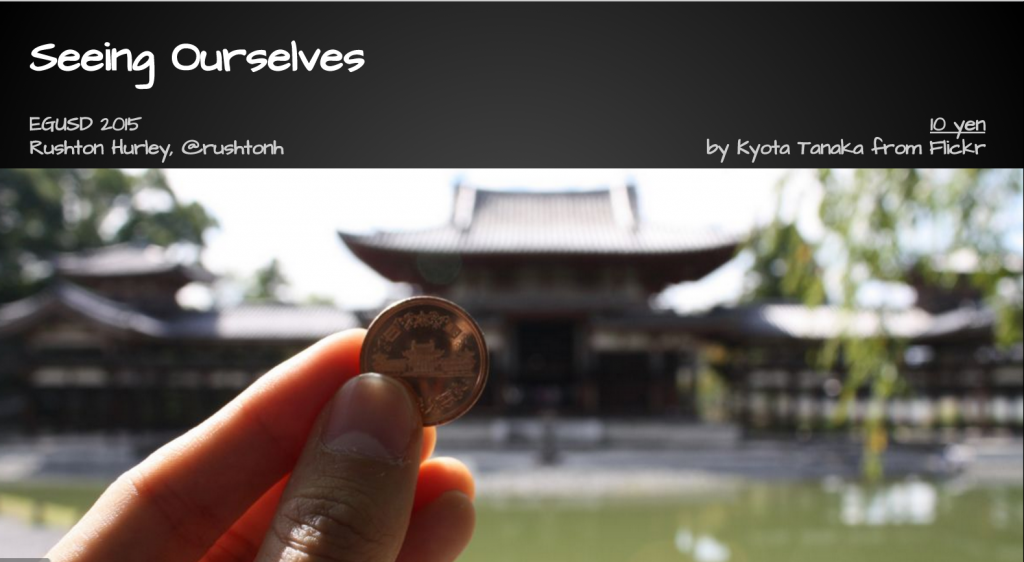 Starting with his opening keynote slide, Rushton also subtly promoted and modeled respect for intellectual property by crediting the image to photographer.

On the his second slide, Rushton made it clearer yet that he was respecting the Creative Commons licensing the photographer chose when sharing his work on Flickr. 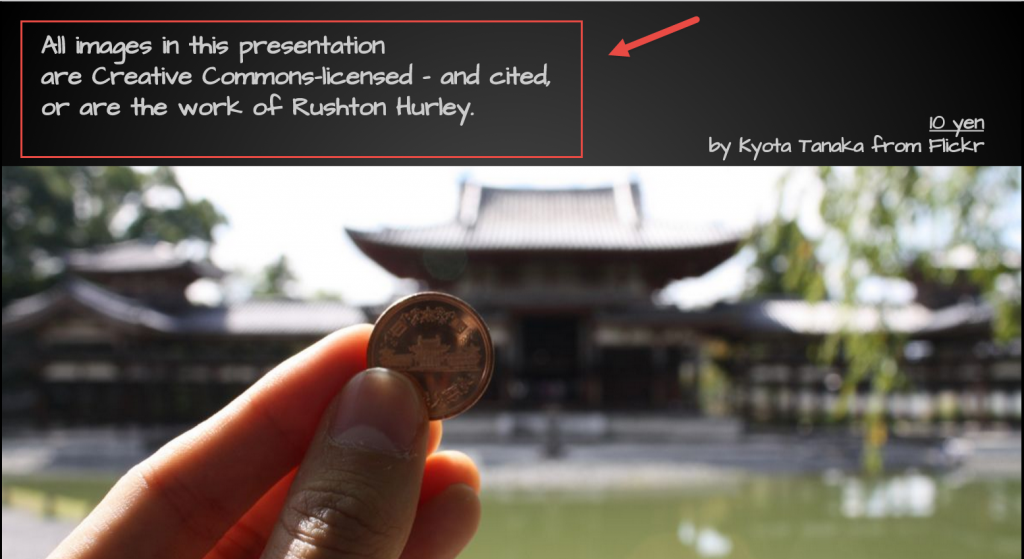 As a huge fan of Creative Commons, I loved that a nationally/internationally known presenter, from start to finish, promoted the importance of respecting intellectual property through proper attribution.

Following his keynote, Rushton facilitated The Magic of Digital Media for Powerful and Engaging Learning workshop. Once again, he started with modeling respect for intellectual property in his opening slide.. 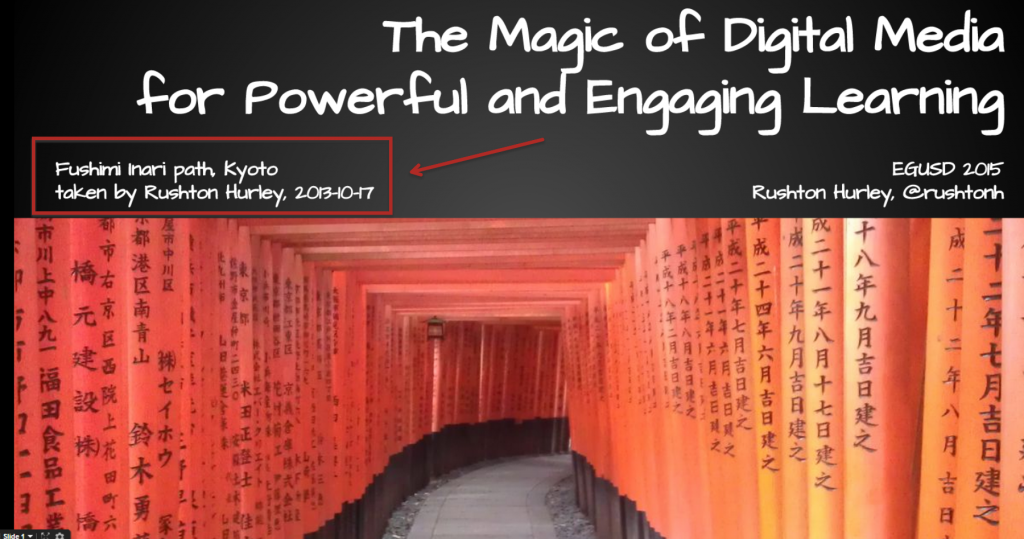 …and on his second slide … 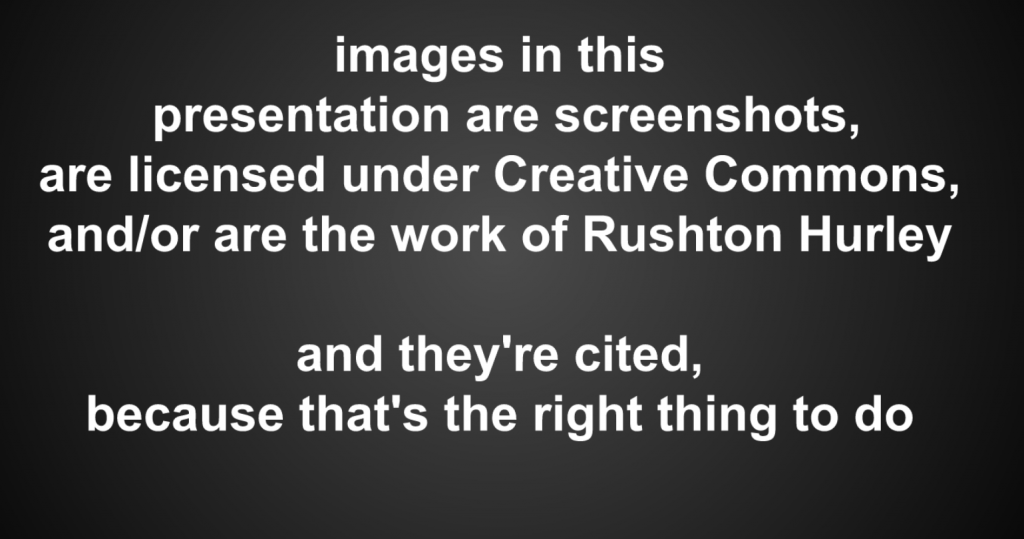 …and then moved on share the power of images via simple teaching tips (EX: start class by projecting a photo and having students team up to generate three possible explanations for the photo – or asking them to explain how the photo connects to yesterday’s lesson).

Just want to say one more time, how cool is that when your keynote speaker and workshop presenter seamlessly weaves digital citizenship into his sessions?!

I was there – at the Sacramento Board of Directors – on Wednesday, joining other concerned educators and citizens in a last minute effort to save one of Sacramento’s primo science programs:  Splash. 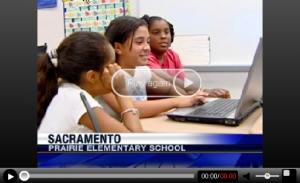 Thanks to Splash, thousands of elementary, middle, and high school students have explored life in Sacramento’s streams and, in the process, have come to understand why taking care of our water supply is so vital to the community. However, the Board was ready to eliminate the program as part of their latest round of budget cuts.

We had our chance to speak out, each person being allotted 3 minutes to justify continued funding for the program.  With Splash director Eva Butler leading the charge, I think the 12 of us who took our turns at the podium helped provide the Board members with an understanding and appreciation that for most kids, “Splash is their first experience with relevant science and things that live beyond the pavement in Sacramento’s streams and vernal pools.”

But it was clearly a team of 5th grade filmmakers from Prairie Elementary School (Lesley McKillop’s former 4th graders) who saved the program.  In less than 2 minutes, their Saving Splash video (see snippets in the above TV coverage) provided a compelling argument that led to a unanimous vote to save the program.

A huge victory for students all over the Sacramento region – and a powerful lesson to our young filmmakers on the importance of taking a stand and the power of media to sway an audience.

Imagine hearing the peaceful music of the harp drifting across an elementary school campus at the close of a busy school day. This image might bring to mind enrichment programs typical of more affluent school sites. But if 4th grade teacher Teresa Cheung is awarded a Pepsi Grant, students at David Reese Elementary School, a Title 1/Program Improvement site in my district, will have access to an after-school program that could be life changing.

Life changing? One student’s story inspired Teresa to apply for the grant:

Thanks to an EETT grant, over the past two years, I’ve had the privilege of spending time in Teresa’s classroom. She is an exceptional teacher, who cares deeply about her students, and continually strives to inspire a love for learning.

Please, please help Teresa fund a set of harps for her after-school program – Harps for Hope. It will take you less than a minute to login to vote – And you can vote every day up to July 31st.

As of today, Harps for Hope is ranked number 125.  If we (you, me, and anyone you know who cares about leveling the playing field) can bring her proposal into the top 10, Harps for Hope will be funded!!!!

Looking for resources for Black History Month? Thanks to the wonderful Sacramento Educational Cable Consortium (SECC), you can read about my recent videoconference with Tuskegee Airman Alexander Jefferson, and then watch the clips:

Still in awe of how videoconferencing can enrich teaching and learning – way beyond the walls of the classroom.