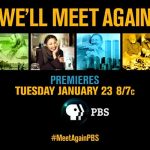 Thanks to an email from Julie Thomas, Library Archivist for California State University, Sacramento,  I made sure to be home last Tuesday by 8:00 p.m.

Julie’s subject line was a grabber for me: Reiko Nagumo “We’ll Meet Again.” Her message was short:

“Here is the link to the We’ll Meet Again website and Reiko’s story is highlighted further down the page. I encourage you to tune in at 8:00 (EST and PST) and 7:00 (CST) on your local PBS station. It’s an amazing story about an amazing woman.” We’ll Meet Again is a new PBS series produced and hosted by veteran journalist Ann Curry. The six-part series documents reunions between people whose lives were suddenly disrupted by historic events such as war. Episode 1 features Reiko Nagumo and her childhood friend Mary Frances, who, following the bombing of Pearl Harbor, stood up for Reiko when no one else would.

I have blogged before about Time of Remembrance, an oral histories project I co-direct for my district with my colleague Kathleen Watt. We had the privilege of interviewing Reiko 12 years ago. Her interview is one I often share with elementary students. I especially want them to know about Reiko’s friendship with Mary Frances (clip 2, 04:52). It’s a beautiful example of what can happen when a single person crosses the line (or playground) to extend a simple act of kindness to someone in need.

The high quality of the interviews (PBS quality, if I say so myself) are the result of our partnership with the Sacramento Educational Cable Consortium (SECC). We are incredibly grateful to the talent and project dedication of SECC videographer Doug Niva.

Several years ago, following a 3-day trip to the Manzanar internment camp, Doug suggested that we make a short documentary to introduce people to our growing collection  of interviews. I’m American Too – A Story from Behind the Fences (16 minutes) includes snippets of Reiko’s interview, along with other internees, whose lives were also overnight and forever changed by Executive Order 9066.

Today, the Time of Remembrance project also includes a Vietnam War section, in which we’ve attempted to capture a little known story: the Secret War in Laos. For a quick overview, watch our 4-minute introduction:

Based on the impact of Reiko’s interview, and in every interview since hers, we always end with the same question: Can you think back to a time in your life (facing exclusion and forces removal, surviving in internment and refugee camps, starting the first day of school in a new country, etc.) when there was someone who stood up for you, making whatever challenges you were dealing with a little easier to cope with?

We are firm believers in the power of a single upstander to make a profound difference in someone’s life – or even change the course of history – and that “it is small things that allow bigger things to happen” (Sam Edleman, Holocaust historian).

January has been a painful month in my district due to a number of racist incidents, which have been widely publicized through local and national media. In an attempt to build student awareness on the exponential negative impact of bystanders, be it face-to-face or online, we invite students across the district, nation, and globe to contribute to our Upstanders, Not Bystanders VoiceThread. We started this VoiceThread a few years ago, and have had an amazing range of contributors, from kindergarten students to humanitarian Carl Wilkens. And, yes, Reiko Nagumo has already shared on the Voice Thread.

Note: A VoiceThread is like a visual podcast. Once you register with VoiceThread for a free account (a process that takes only a couple of minutes), you will be able to post a comment via voice, text, or webcam. Your comment will go “live” as soon as we approve it. If you are in a school district that is a GSuite (formerly known as Google Apps for Education) district, you already have an account, as VoiceThread is now integrated into your district Google account. Head to your Google Apps launcher (waffle) and scroll down to the More section to find the VoiceThread icon.

We look forward to hearing your students’ upstander stories – and yours too! Besides the VoiceThread, you can also leave a comment on this post. We’d love to showcase any projects or programs you are implementing in your schools to promote tolerance, respect, empathy, inclusion and global citizenship.

“Never doubt that a small group of thoughtful, committed citizens can change the world. Indeed, it’s the only thing that ever has.” ~ Margaret Mead