Alfie Kohn’s Friday morning tweet was on my mind as I headed down the hill yesterday to my school district – and 24 hours later, I’m still thinking about how I would answer his question.

I visit a lot of school sites, both in my day-time job and through a number of organizations I belong to. Most front offices and libraries have professionally done motivational posters. Some have student-done posters. I think the latter may be more reflective of a site’s educational philosophy than the former. I think the purchased posters reflect where sites would like to be; student-done posters reflect more the realities of the school day.

Take these three student samples, for instance, which were entered in a district-sponsored campaign to motivate students to get to school on time (click for an enlarged view). 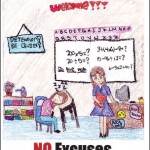 Could it be the lack of motivation for students to get to school on time stems from being greeted with messages such as “Take out your textbooks”or “Detention – Be Quiet” or a major part of the school day being spent sitting (daydreaming, sleeping) in rows? 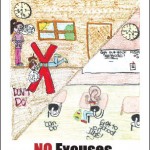 I recognize that change is hard and that all of us who are teaching in 2010 were born in the past century. But I am optimistic that change is happening, due in large part to how easy it now is to access mentor texts and teachers 24/7.

Cheryl Oaks, in a recent post to her Tech & Learning blog, What’s it like to be a students in today’s classrooms?, asks, “Would I be a different type of learner than I was 50 years ago?” She answers the question by providing some great online resources.

What if students started the day, for instance, with a message on the board something like “log on to the Newseum and …” or “team up and head into David Warlick’s sources for Raw Data and …“? Would the No Excuses posters featured above  reflect a different learning environment? I’m betting yes.

I’ll end this post with a great video by Kevin Honeycutt, one I plan to share with colleagues as we continue conversations on what 21st classrooms should/could look like – maybe even eliminating the need for motivational posters;-).

I finally bought a copy of Kelly Gallagher‘s Readicide.  I wish I had read it sooner so that I could have joined in the VoiceThread and the English Companion Ning discussions. However, I have it now and want to promote it to anyone working with K-12 students! In less than 150 pages, the author clearly explains “how schools are killing reading and what you can do about it.”

If you are at a site that does not support a minimum of 15 minutes per day of silent sustained reading – read this book.

If you are at a site that mandates AR (Accelerated Reader) – read this book.

If you are at a site that mandates a reading anthology exclusively, at the cost of removing novels – read this book.

If you are looking for strategies to engage students in literature and promote a life-long love of reading – read this book.

With so many thought-provoking ideas, powerful strategies, and even links to the supporting research that are applicable to elementary through high school readers, Readicide would make for a great faculty book club read.  I’ll leave you with Kelly’s closing words:

If we are to find our way again – if students are to become avid readers again – we, as language arts teachers, must find our courage to recognize the difference between the political worlds and the authentic worlds in which we teacher, to swim against those current educational practices that are killing young readers, and to step up and do what is right for our students.

We need to find this courage. Today. Nothing less than a generation of readers hangs in the balance.”

For the last two weeks, I’ve been immersed in writing the application for my district’s EETT Round 7 grant (federally funded grant, administered through the state). The form and requirements are enough to put off a grant-writing newbie such as myself from jumping through all the hoops required in time to meet the April 23rd deadline. Why would I volunteer for such a task? In a nutshell, I want to provide three of our low-income elementary sites with the equipment, research base, and professional development needed to transform the current language arts program into multimedia/multimodal opportunities to take a publisher’s scripted program beyond the walls of the classroom and into the 21st century. In large part, the inspiration for writing the RFA comes from:

As part of the proposal, I am therefore very enthusiastically including Mathew Needleman, who will connect from Los Angeles Unified SD via interactive videoconferencing to work with teachers and students on the skills needed to take an Open Court (district-adopted language arts textbook) theme through the steps required to create an language arts rich production.

On this beautiful California Saturday morning, I wish all of you across the nation applying for the EETT grant (and working on the RFA over the weekend) the best of luck:-)