Let me start this rant with a positive example of how the Accelerated Reading Program is used at some school sites. I’m thinking of the 5th grade teacher who is starting a unit on the American Revolution and is seeking historical fiction and biographies to supplement the history textbook.  The school librarian has used AR’s leveling and labeling system to make it easy for the teacher to provide his/her students with books that match a wide range of reading abilities.  If this is how AR is being used at your site, then I think the expense and time commitment is certainly justifiable.

I fear the above use is not the norm though, and the more common practice is that students take AR quizzes in a computer lab…where they receive no feedback on their answers.  I think Robert Marzano’s research makes visible the harm in using technology solely for assessment rather than as a teaching/learning tool: 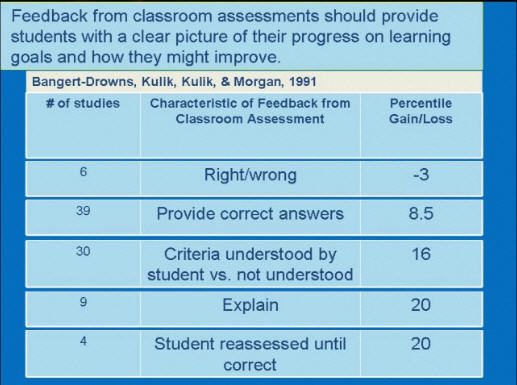 I grabbed this screen shot from Marzano’s CUE 2009 keynote address (http://cuecast.blip.tv/#192464), which I highly recommend watching.

In my district, many of our elementary sites are paying for the pricey web-based version of the quizzes. For the most part, I’ve kept silent on the value of the program, since so many teachers seem to like it.  Several years ago, I heard Cheryl Lemke share research from the Metiri Group’s research on AR. Their findings were that AR was “a wash” – some students would improve their reading; others would show a decrease in reading scores.  Following Lemke’s presentation, I sent out an inquiry to the NCTE‘s Talkies group.  NCTE friend and mentor Nancy Patterson shared that “cheating was a major issue” and what the research really showed was “buy the books, not the tests.” A quick Google search on Stephen Krashen +Accelerated Reader brought up a white paper entitled Does Accelerated Reader Work? Here are the findings in a nutshell:

The results presented here strongly suggest that of the four aspects of AR, access to books, time devoted to reading, tests, and rewards, only the first two are supported by research. There is considerable evidence that providing access to books results in more reading and better reading and considerable evidence that providing time to read results in better reading. There is suggestive evidence that incentives do not promote additional reading in the long term. The AR research literature does nothing to change these conclusions.”

What set off this rant? A computer lab teacher at one of my EETT sites asked if it would be OK to load AR onto the laptops in the wireless cart that had just arrived for the 4th grade teachers.  I replied to her with a copy to the principal that I was OK with it as long as the taking of AR quizzes did not replace the blogging and in2books reading and writing that the students were beginning to engage in.  Since the goal of the grant is to improve literacy skills, especially writing, I felt the need to make clear that AR would not improve student writing skills.  I had a sudden nightmarish vision of the $20,000 COW becoming a vehicle for mindless time spent testing, via multiple choice, recall – with no time left for connecting, creating, collaborating, sharing, or any kind of higher-order thinking.  The principal responded that he doubted that would be the case with these teachers.  And from what I have seen during classroom visits, the laptops are indeed being used to promote 21st century literacies (by a 4th grade team that is for the most part new to technology – but extremely dedicated, talented and open to new ideas).

Because so many sites seem committed to the AR program (and expense), I’m hoping readers might have more and better examples of how AR is worth the time and expense. I’m all for the increased access to books; it’s just the testing part I question.  Am I missing something?

Interactive whiteboards, such as Promethean and Smartboard, are an expensive investment (about $1,200 each). When writing my EETT grant, I did not build them into the budget.  What I did purchase was a laptop and LCD projector per teacher (starting with 4th grade this year; 5th grade next year), plus headset and stand-alone microphone, voice recorder, and web camera. For each site, I included a laptop cart and a filmmaking set (2 Canon miniDV cameras, microphone, MyBook, and Flip camera). If I have any money left, I’ll buy as many document cams as possible.

The budget did not include SmartBoards.  Once the RFP was funded, my boss suggested I might want to redo the budget to work in  SmartBoards.  My wonderful evaluator (Dr. Carl Whithaus, UC Davis) and I chatted about making the switch, but since our grant is all about improving students’ English/Language Arts skills, especially writing, via the integration of multi-modal, multimedia tools and strategies, we agreed the Smartboard might almost be a “distractor” from our goals, and I wasn’t willing to cross out any of the items listed above.

Last week I traveled to Palm Springs for the 2009 CUE Conference.  At the top of my to-do list was to attend Robert Marzano’s keynote presentation and to hook up with the SmartBoard folks.  Here’s what happened:

Marzano’s Keynote: His research stats were impressive, with the “sweet spot” (the perfect storm of student achievement according to his findings) reached when the technology was used by an experienced teacher, who has had training, having had an interactive whiteboard for 2 years, using it 75% of the time in class. The gain in students scores = 29% . Wow! That’s an enormous gain! However, he did warn that beyond 75% use in class, student scores drop.

I left his session with a few unanswered questions (what was the break down in scores? did student writing scores improve? how many hours of PD are typically required to become a proficient user? an innovative user?)…and set off for the exhibit hall.

Exhibit Hall – I headed to the SmartBoard booth in hopes of truly “getting” SmartBoards.  Probably my mistake, but my first comment to the sales rep was that one thing teachers like about their ancient overhead projectors is being able to face their class while writing.  He proceeded to demonstrate how he has learned to write facing his audience. OK, yeah, I could sort of read what he was scrawling on the board with his hand behind his back.  With that, I set off for the SmartBoard demo room…

SmartBoard Live Demonstrations Room – I headed to the front of the class where a teacher was learning to cover up her multiple-choice answers with balloons….Hmmm…OK, cute, but not likely to improve student writing scores)… Back to the Exhibit Hall!

Exhibit Hall – Back at the SmartBoard booth, I told the sales rep I needed to see an example of how this technology could genuinely improve learning (beyond the obvious engagement factor in being able to pop SmartBoard balloons;-).  He pulled up a split screen with a math problem on one side and space for a student to demo his/her solution on the other.  OK, this could be useful, given that you have the ability to record and save this demo.  In fact, a SmartBoard would be a much easier way for students to demo how they solve particular problems than this VoiceThread example. I am a huge VoiceThread fan, but unless students have access to a tablet PC or a Wacom tablet, it’s pretty klutzy to write or draw with a mouse…..Hmmmm…

Back to the SmartBoard Live Demonstrations Room – I  lucked out on my second trip to the demo room. I met Mark Murphy, an  elementary school teacher from the Westminster School District. Mark shared how he uses resources from the National Library of Virtual Manipulatives to teach such abstract concepts as crossing out and borrowing to solve subtraction problems where the top number is smaller than the bottom number.  Oh wow, even though my grant is about improving E/LA scores, I know teachers will love this use of SBs!

OK, OK, I’m starting to “get” SmartBoards.  But I do still have several concerns:

Because we all know of cases where a school site has done mass purchasing of an expensive technology that has somehow ended up gathering dust, I would recommend starting with the mobile model. That way, the early adopters at each site could delve in, share the board, and based on their successes and lessons learned, bring the rest of the staff on board, at which time it would make $ sense to install the stationary models in every classroom.

But back to the SmartBoard – While waiting for some hands-on time with our SmartBoard, I’m hoping to compile a list of resources, lessons, and strategies for using this tool to improve student literacy, particularly writing.  I’ve joined the SmartBoard Revolution Ning and look forward to making the transition from consumer to producer of SB best practices.

I would very much appreciate any SmartBoard tips and would love to join some on-going SmartBoard conversations. In return, as I gain first-hand knowlege on the power of interactive whiteboards, I promise to share my findings on this blog, Twitter, the SmartBoard Revolution ning, or any venues I find in my journey to beoming a SB poster child:-)