A year ago, a wonderful principal at one of my district’s elementary schools invited me to give a 1-hour workshop at his site on Project-Based Learning (PBL). I was thrilled to have the request come from an administrator and for the opportunity to organize my thoughts and resources into something useful for teachers.

I set to work on a Google slideshow, so that the teachers would have an easily-edible presentation to use with their students and parents. As you can see from the presentation (which includes the talking points), I pulled mainly from Edutopia and BIE (Buck Institute of Education), two rich, dynamic, free gold mines for PBL samples, resources, and best practices. The only thing missing from my slideshow was a PBL sample from my district, since this was an in-district workshop.  Thanks to the amazing work of 5th/6th grade teacher Jim Bentley and his students, that missing district element no longer exists.

On Thursday, one year later, I’ll be headed to Jim’s site to co-facilitate a PBL workshop that’s open to all district  teachers and administrators. What makes this workshop very special is that some of Jim’s students will also be presenting with us.

I celebrate that one year later, there is a small, but growing number of teachers in my district embracing PBL – with a common thread of having supportive administrators who recognize the value of students being engaged and feeling a genuine purpose for their work. So my idea is to offer our PBL workshop each quarter, with a different site/teacher(s)/students hosting the workshop.

In collaboration with Jim and other contributing PBL teachers, we’ll continue updating the slideshow. We’ll also be adding to our PBL digital handout. We would welcome more snippets of what PBL looks like from primary grades through high school, across the curriculum and content areas. If you have sources we should add, please share them via a comment.

“Inquiry is the personal path of questioning, investigating, and reasoning that takes us from not knowing to knowing” Suzie Boss

Signposts to Better Projects: How to take thinking deeper in digital age PBL – Suzie Boss and Mike Gwaltney’s session was one of the first entries on my conference planner as a “must see” session! Suzie has already posted the session slideshow (below).

1.Set stage for inquiry – Example: Prior to announcing a new project, place banners and posters outside and inside the school as “grabbers.”

2. Create a culture of collaboration – Example: Make the world safe for thinking – the marshmallow challenge (TED talk) – http://marshmallowchallenge.com/TED_Talk.html – will get you thinking about safe environments for learning.

4. Think about thinking – provide some deliberate ways for kids to think about their thinking, to develop thinking routines. Think/Pair/Share, for example, is a quick way to collect thoughts, put them out, and get some response.   Use Google Docs to promote reflection, using targeted questions (how’s this assignment compare to another project). Have students create videos as formative assessment. For more ideas on helping students develop a “thinking routine,” check out Peter Pappas’ A Taxonomy of Reflection and Project Zero: Thinking Routines.

5. Think as experts do – How do you encourage thinking as experts do? Put kids in the role off experts. Show Thinking like a Historian chart. What are the ways that people think in your discipline. Kids need academic vocabulary of the discipline. “It’s relatively unnatural for a young person to be interested in the past – they haven’t lived long enough.” Use current events. Checkout George Mayo’s Transitions project. His students had to think like illustrators for project; therefore, George brought in a husband and wife team.

6. Watch for spirals (project creates more energy) – what’s the opportunity.  Is it worth taking project further. 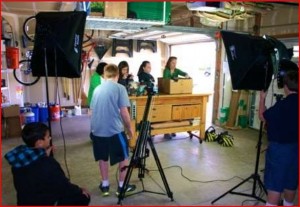 Checkout Ghost Jacket from Lost & Found Films – a project that transitioned from cleaning up a mess at a school site to sending jackets to those who needed them.  And, of course, what better example of a spiral could Suzie use than Jim Bentley’s student film academy’s award-winning documentary (a continuing/spiraling project) on hazardous waste: Recharging Our World (very proud of my inspiring district colleague and his incredible students:-). 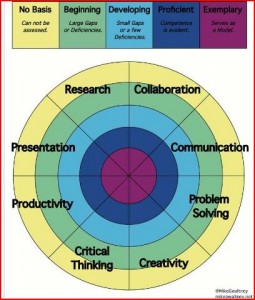 7. Assessment: Think about assessment throughout the project, formative not just summative. Grading on process across categories vs. a single grade on final project/product …. Oh my, this is brilliant!!! Mike Gwaltney has created PBL skills “hit the bull’s eye” sort of a rubric – for formative and self assessment to “get students thinking about their own learning.”

And a few more books to add to my summer reading list, per Mike Gwaltney’s recommendations: Teaching with Your Mouth Shut (David Finkel) and Understanding by Design (by Grant Wiggins). If you have not already read Suzie’s Reinventing Project-Based Learning,  this is a great starting point for your PBL journey, as well as the Buck Foundation’s PBL website.

Design Your Digital Tattoo – Helping Students Design Their Digital Image – Adina Sullivan pointed out what should be obvious to all of us who teach, model, and promote digital citizenship: the term “digital footprint” should be replaced with “digital tattoo.”  Having watched my son, a few years back, go through the process of tattoo removal, I can second Adina’s perspective that it’s a difficult process, requiring numerous (painful) sessions, and that the tattoo is never fully eliminated. Tattoos are a much more accurate symbol of our online personas than footprints – especially the footprints in the sand images.

Mashup and Remix: Reading, Writing, Research, and Reaching the World – I arrived late to this session (got side tracked walking through the display tables), so I missed Bill Bass’s part of the presentation.  With only a 1/2 hour remaining, I wondered how my NWP/NCTE colleague and friend Sandy Hayes could possibly make a case for fair use in that time limit.  She did! Here’s a link to the PDF with many of the links from the slideshow.  As soon as Sandy posts the link to the slideshow, I add it to this post.  Another great presentation from Sandy!

I’m trying to imagine the climate at Oakridge Elementary School last week, based on my friend Alice’s description:

I arrived at my school Monday to a site abuzz. Coworkers had heard from teachers at other school sites in the district sharing that on Friday, they had received an email that was going out to “a select group of teachers” in our district, offering them the chance to work in high needs schools. Recipients were directed to a site for the Talent Transfer Initiative, a project from the Department of Education ARRA (stimulus) funding. More information about the background of the program can be found on the site for Mathematica, who will be evaluating this project. Although “priority schools” are not mentioned in the email, it’s pretty clear that in the district, my school in particular (being identified by the state as bottom performing) and the other five priority schools are the “target” school or schools for the program.”

It was only last month that the greater Sacramento area was treated to the SacBee’s front page feature story on the possible closing of Oakridge (which I blogged about here.)  I work in the next district heading south down Hwy 99.  Oakridge is situated in south Sacramento. The northern part of my district is also in south Sac. Not surprisingly, there is a good bit of flow through traffic in our transient Title 1 populations, with students starting the year in Sac City USD and then transferring into Elk Grove USD and visa versa. Therefore, ‘those students’ can potentially become our students.

If you continue down Hwy 99, past the off ramp for Oakridge, and take the Florin exit, as I did last Tuesday, and head over to David Reese Elementary School, you will find a more promising environment for teaching and learning – despite that fact that Reese is also in Program Improvement.  The school has had a series of administrative changes, but I’ve heard more than a few teachers refer to their current principal as “a gift.” And how many school websites feature their administrators and office staff dancing in chicken suits?!

My first stop at Reese was Mr. Alfonso’s 5th grade classroom.  I joined SECC cameraman Doug Niva as he interviewed a number of Mr. Alfonso’s filmmakers about their SEVA film entries. Hearing students share what they were learning from movie making (e.g., storyboarding, script writing, camera shots and angles, teamwork) made me wish all Title 1 students had access to project-based learning as part the school day  – even during  the month of April, which is often referred to as “the cruelest month of all” in terms of drill ‘n kill at Title 1 schools.

Mr. Alfonso was not in the classroom during the interviews. An off-track 5th grade teacher was covering his classroom (working with students on a vocabulary building exercise)  while Mr. Alfonso and a film team were somewhere else on campus working on a film production – with a Friday deadline. When the crew returned to the room, I was treated to a preview of The Secret to the CST, a production that would be shown during a Friday assembly to remind students about testing strategies. Hmmm…students consuming AND producing tips on test taking…

Thursday I was back at Reese, this time to join Teresa Cheung’s 4th grade students for an  interview with earthquake relief worker Leisa Faulkner who had just returned from  her latest visit to Haiti. Thanks to two of Mr. Alfonso’s filmmakers, the interview was recorded. Next week, I’ll be back at Reese to help Ms. Cheung’s students decide which medium (podcasting, movie making, blogging) would be the best tool for taking Miss Leisa’s interview beyond the walls of the classroom and for honoring her request “to not forget Haiti.”

Will the Reese students achieve higher CST scores than the Oakridge students? I don’t know. No matter how demoralized the Oakridge staff is, I know Alice and many of her colleagues will continue to work well past contract hours in their race to level the playing field of  grinding poverty from the surrounding community – as will the Reese staff.  Come September, CST scores will be published. But if I were to place a bet…

Two Title 1 schools, both in PI, only a few off-ramps apart, but while one site is being taken apart from without, the other is rebuilding from within….

Sorry, Alice, but based on the apparent total lack of support coming your way from the “higher ups,” I’m betting on Reese.